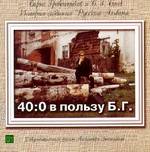 Of course you can't entirely ruin the music...though you can try, by virtue of chopping songs into bizarre half-studio, half-live, Frankenstein hybrids. As Dji suggests, though, some of the musical interludes are indeed worth watching, particularly acoustic versions of "Stampeding Horses" and "Wolves and Ravens," which provide some good insight into the songs' construction. But even in the best of these bits Lipnitskii succeeds in being both artsy-fartsy and banal. "Ladyship," with which the film opens, is typical of what's wrong with this film: a totally static blue-filtered close-up that passively watches BG pick through the song. Any schmuck with a video-cam could have done as much. This is considerably better, though, than having BG singing straight to the camera among the daisies for "Flyer" (the one song in the film not from Russian Album) which comes across as pure, unadulterated kitsch.

The non-musical parts of the film are garbage. We get a lot of footage of BG on the bus, and BG engaging in strangely touristy activities (for a Russian in Russia) such as visiting the Gzhel factroy and shopping at Izmailovo. We have truly astonishing amounts of footage of people's feet and/or parcels. The little snippets of interview are generally very difficult to make out over the pervasive background noise, and come across as haphazzard, off-the-cuff Q&A lacking a larger vision or connecting narrative or theme. The news footage-like bits—mostly the August coup of '91—are no less incoherent, clumsy and disjointed: Really the only good bit comes when the camera at last settles for a few minutes on that great Russian archetype, the Raving Old Man. Earth-shaking events are happening—essentially the last gasp of the old Soviet Union—but for all you see or know from the film you could be at an especially poorly attended May Day celebration.

On the plus side, there is a good "for the ladies" moment: Boris in the banya! (Sorry girls, legs modestly crossed). But what exactly is he doing...snorting eucalyptus?

I guess what I really don't like about this film is the wasted opportunity: One certainly should have been able to come up with a great documentary about the making and performance of a modern classic during two of the more turbulent years in Russia's recent history. In more skilled hands you could have had a gripping piece of movie-making. Unfortunately, all you have is this sad, amateurish, choppy muddle. Better to put on Russian Album, close your eyes, and let your imagination float free...

NB: As of this writing, this is the only Akvarium documentary or concert video to be deemed worthy of inclusion in the discography on the Official Site. I guess Boris must like it.