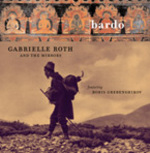 Did you like Refuge, but deep inside in that little quiet place opened by all the Tibetan chants truly long for a sequel to Bardo? Did you enjoy Bardo, but dream of actually traveling to Barndo with a soundtrack that had a little less brass and a whole hell of lot more percussion? If so, your demented ears will welcome this illegitimate child of the two aforementioned albums, "Bardo II" (a.k.a. Pereprava). BG once again teams with Gabrielle Roth and the Mirrors and brings to you a colossal merger of nonsensical syllables with tribal rhythms. These ingenious opuses go everywhere and nowhere leading you on a journey within and without. Is this a sequel or is this the beginning? Well, to find out, grab some popcorn, a soda, observe the exit signs, press play, and please do not disturb your neighbors….

Sand Castle The sun melts upon the horizon as the lone rider, his camel his only companion, slowly crosses the barren desert. Feel the lumbering melody of the camel's steady trek onward. To pass the time a lone mantra enters our fearless leaders' mind—disillusioned with the city of Bardo, he heads toward that mythical city of Barndo, where everyone's in and nobody's out. His sister, Sirakh Malatoy Tan's voice still echoes in his mind. The Journey begins.

Infinite Sky As night falls and he sets up camp, mysterious creatures seem to scurry just out of the range of his vision. He erects his tented dwelling and lights a fire, whilst reminiscing about his sister's ill-fated love affair with Skir Lametan of the Har gang. Our hero had never completely forgiven them both for betraying him (Skir aka Skipsi Drag was our hero's first and only love even after Skipsi had fallen for Sirakh-and hence swore off his sexual experimentation). Now that he had lost both of them (see Bardo review for full story), melancholy was his only true love and he carried always with him a black rose—tattooed on his chest as a not so subtle reminder of his infinite sadness.

Dissolve As our hero drifts into unconsciousness, visions of Sirakh and Skir intertwined in the smoke of the dying blaze haunt him. They sing of never ending love as legions of tiny sparkling demons dance and twirl about. Siiiiiiggghhh!

Nectar Moon Has he slept here for one night or a millennium? Svarog, the Slavic Sun and Fire God, merges with the Nectar Moon. Is it a brilliant mirage as day passes into night without dusk or dawn? Has he been joined by a heavenly host of angels or just passed through the looking glass? Has he entered Barndo or has Barndo entered him?

Sun Dust Eclipse From whence came this dust? Our hero's vision clouded by the rising dust from the arriving minions of aboriginal deities circling his camp chanting Zarn Hlar. Seemingly separated from Svarog and his ultimate enlightenment, he has no choice but to counter the cosmic attack with a counter-chant of his own “homolay, homolay, homolay, homolay”

The Crossing Has the counterattack succeeded? It's likely, as the aborigines seem to have settled down and started to build a bridge to a clouded city in the distance. The hammers pound out a nice rhythmic cadence as electric tools sand the rough-hewn lumber down to what appears to be an origami-like golden bridge.

Bardo Our hero hovers mere millimeters from the surface of the bridge as he nears the city he has known forever yet never truly entered. Intrinsically linked to the city, the gates part before him as his bare feet experience the sensation of the dirt from whence he came and to which he will return. He has returned to Bardo that was always and will always be Barndo.

Mansion of Gold Settling into his favorite chair in his favorite room in his two-room apartment above the bustling streets, he is at peace. He has dominion over this home, his Mansion of Gold. He has inherited all the wisdom of the ages—what need has he to ride camels through the eye of needles anymore? Looking down at his shirt we see that a crimson stain has appeared upon his chest. Unbuttoning his shirt, he declares “Loi Bukanakh”, for a Red Rose has replaced his Emblem of Sadness.

THE END...or is it the beginning? You decide…..

Dzhon notes: Just to be wacky, when B.G. finally released this album on the Russian market, besides retitling the album Переправа and reversing the billing (BG + Roth, as opposed to Roth + BG), he also gave the tracks Russian names that are unconnected to the English ones Roth had assigned to them. The Russian track listing is reproduced here below for the curious.