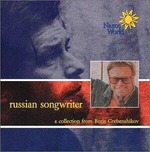 The Bodhisattvas, of course, have owned all the stuff represented on this compilation for years and years, but—as this is arguably the first Grenbenschikov opus since Radio Silence to be widely distributed in the U.S.—it may represent the perfect opportunity for American Grebenschikovian greenhorns to take their first tentative steps toward the bliss of Akvarium-induced nirvana. All the Grebenschikov orginals here are A-list, and the covers (Okujava's "Van'ka Morozov," Vertinskii's "China," the Zabolotskii/Krasnovskii rarity "Tarusa," and the traditional song "Little Loom") are no slouches either. So buy a handful, stand on a corner, and proselytize, proselytize, proselytize!

Liner notes include the lyrics for the songs in four (!) languages—English, Russian, French and German—so if you've ever wanted to seduce a French babe by comparing her to "l'avion le plus du monde" or comment upon a fraulein's saucer-like eyes ("tellergrossen Augen") here's your big chance. Curiously, e.e. cummings was apparently disinterred and brought on board as editor for the liner notes, since Russian is the only language in which capital letters are allowed to make any appearence, even for proper nouns. (If this seems odd for English, it's certain to have heads shaking in Deutchland.)

The English translations are credited to BG and John Frederick Baylin, an old BG translating hand from way back. The translations are a kind of weird hodge-podge in that sometimes they go for the (slightly grating) hyper-literal ("What do you meditate on, you maiden of enlightened days?") while at other times substantial liberties have been taken in order to achieve passing English poetic effects. I take this to mean that what we have, then, are Grebenschikov translations and Baylin translations, not the collaboration the credit note implies. (Of the two styles I actually prefer the literalism, seeing little purpose in bending over backwards to achieve sing-song rhyming effects that are hardly ever more than "fair.") Such caviling aside, however, these translations remain true to the spirit of the Russian originals, and—by virtue of bearing BG's personal imprimatur—must reflect his own idea of how the songs ought to be understood in English.