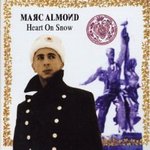 Much as I esteem tikka-ri, Lord High Pooh-bah of the Finns, in this instance his analysis is quite wide of the mark. As High Coroner of Munchkinland I must aver that not only is this really bad, it really is most sincerely bad.

And the key word here is sincerely. This opus is covered in sticky, yellow-white, viscous sincerity to a terrifying extent, evident in every gooey note Almond warbles even before one turns to the liner-book. (Yes, "book": in the "limited European edition" that I was so incautious as to invest my pocketful of euros on, the disc comes with a miniature hardback book with an introduction by Marc, full lyrics, photos of the songwriters and performers, and commentary on every song by one Mikhail Kucherenko.)

"Mit'ki" it most certainly is not: neither in spirit nor in execution. For one thing, most of the songs Almond is covering belong to a different era and a different tradition—post-war Soviet estrada rather than the older popular tunes favored by the Mit'ki. Secondly, where the Mit'ki albums were leavened with a salutary dose of irony, there's not a whiff, not a smidgen of such to be found here. This extends even into album's cover art which features Marc looking sincerely stoic in a Red Army border guard get-up, with one of those iconic Soviet Hero Worker statues in the background. Probably not since Billy Bragg bleated "The Internationale" has there been such a mutton-headed appeal to collectivist nostalgia made by a Western pop-star.

Actually, part of me reluctantly admires the missionary fervor of this project: the desire to introduce the rest of the world to a rich musical tradition that remains far beyond the ken of most people outside the FSU, and to honor the superannuated stars of a departed era. (Almond sings duets with an octogenarian and a septuagenarian—"Khruschev's favorite singer"!—among others.) But, ouch, the results ain't pretty. As one ought to have expected, Almond's cheeseball 80's synth-laden crooning meshes poorly with these rusty relics of Soviet glory days. The image of Lenin's shrunken, shriveled corpse—begging, after all these years, just to be buried—tricked out as a slutty mochalka kept popping into my head.

Too, I believe I could have happily lived to the end of my days without ever hearing "Очи Чёрные" rendered into English. And anybody who'd even think of recording with something called "the choir of the Higher Naval Engineering Academy" needs to have his head examined. But for sheer pain, nothing can top his duet with Mumii Troll's Ilya Lagutenko—he of the Muppet voice—on a bitter-cup-of-kvas of an old Russian romance. I'm actually one of the bigger Mumii Troll fans in this time zone, but this sounds like George Michael and Elmo trying to do Billie Holiday, and do it sincerely.

Of course, what's really of interest to us here, to the extent that anything really is, are Almond's renditions of "Государыня," and the Vertinskiy cover, "Nuit de Noel," for which Boris was recruited to duet. These, as it happens, are among the tracks on the album where Almond acquits himself most credibly...leaving the strange impression that if Marc Almond really felt compelled to record a Russian album he should have enlisted Sampizdat as his backing band and concentrated on Grebenshikov covers, preferably in Ivanov's Beatles renditions.

But back to "Государыня"…The English translation (Almond's, like almost all the others on the album) is faithful to the original without being unduly literalist, as is the musicianship—unsurprising given that (a no-longer-extant line-up of) Akvarium actually played on the track. No soul-shivering mandolin on this version, but Schurakov's accordion shows up, as does Ded's flute, and a throbbing double-bass lends a growly punch to the song that helps to offset the noxious synth effects that pop up here and there. The main puzzle is why, having translated the rest of the song into English, Almond chose to keep the title-word in Russian—doubtless leaving his non-Russian fans to wonder who or what the heck a "Gosudaryunia" [sic] might be. (A key may be in the mis-transliteration itself, which is an approximation of the way Almond pronounces the word…he being by no means the only would-be Russian-speaker to struggle with the slippery "ы") Lesser, but still intriguing, puzzles, are why M. Kucherenko finds the song "even more poignant after the tragedy of Sept. 11" (for my part, I have great difficulty subtracting the Russianness from Russian Album) and, on a very minor note, how MK could misstate the release date of Russian Album by the better part of a decade.

"Nuit de Noel," for its part, suits both Almond's limited vocal range and would-be chanson style, and benefits from a translation (Olga Lutskaya's) that's subtler than anything Almond produced on his own. Grebenschikov, however, shows up only on the very last verse, so this is no real "duet" as advertised…which may, in fact, be fortunate, as they appear to have caught Boris in the late stages of a nasty bout of the grippe: he's extremely hoarse, sounding considerably more like Tom Waits at his froggiest than he does like himself. (It may have something to do with the remarkably shoddy mixing found throughout Heart on Snow—this album is brand-new but it already screams for remastering.)

Most of the rest of the album is only just barely "listenable" IM-not-so-HO. But what it is, mostly, is "bewildering": one has to give a big tip of the hat to gospodin Almond for the sheer ballsiness of the endeavor, even if one completely fails to fathom the point. Who is this album for, after all? Marc writes that it's "for his Russian fans," but unless most of his Russian fans are survivors of the Great Patriotic War, it's impossible to imagine that the spectacle of an aging English pop-star revisiting the pre-Revolutionary and Soviet hit parade in a dog's breakfast of English and (passable but markedly accented) Russian will elicit more than a massive collective "Ты чё??" from Russia. Nor can I imagine that this album will do more than confuse Almond's Anglophone fans—among whom, full disclosure, I've never numbered myself—except perhaps as a listen-to-it-once curiosity.

Am I too harsh? Alas, no. The Road to Musical Hell is paved with tribute albums/vanity projects of just this very sort. Even for Boris—whose voice is far better than Almond's and who really understands the musical tradition in question—can barely get away with it on Songs of Vertinsky and BG sings Bulat Okujava. (Why, after all, not just listen to Bulat singing Bulat? BG's very faithfulness to the originals is what renders them generally uninteresting.) Boris, however, has never attempted a musical stunt remotely as kooky as this; indeed, it gives us a pretty good idea of what might happen if Boris actually took one of our more off-the-wall Wish List suggestions and made it a reality: a Boris Gospel album, say, that actually featured duets with Mahalia Jackson, Aretha Franklin, the Mormon Tabernacle Choir and—just for the hey of it—Eminem.

In sum, while it's interesting that Marc Almond is so enamored of Russia that he's willing to undertake the metaphorical equivalent of stripping naked and running around Red Square waving a vodka bottle, a pickle and an icon, I can't in any way recommend paying for the spectacle.