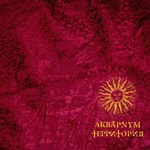 It's worth noting right off the bat that this project has hosed over two Bodhisattvas. First there was Maik, whose brilliant cover and insert design "won" and then, after some months, "un-won," an alleged design competition advertised on the Internet. (BG & Co. eventually settled for the pretty darn boring velour cover you see, apparently borrowed from Boris Rubekin's wardrobe, without a word of explanation). Then there was Dzhon, who paid premium rubles at a BG concert on the assurance of a kindly-looking babushka that the disc he was buying was "hand-carried" from Germany, only to discover shortly thereafter that he'd been sold the super el cheap-o, liner-notes-less knock-off intended for the Russian market, and which retails for a fraction of the cost of the import.

But we're not bitter. Oh, no. Territory's problems are all of its own making, consisting of disappointingly tepid versions of the new songs, "The One That I Love," "Under a Bridge like Chkalov" and "New Song for the Motherland" (the latter two are far better represented on the acoustic BG solo set Prayer & Fasting available on the Internet), and jarring segues—most annoyingly from "Kostroma, mon amour" to "2-12-85-06" and back again to "The Fastest Airplane." Which is to say, the fact that all the songs are great does not necessarily this a great collection make. Or, as the main character in High Fidelity avers, there's an art to making a great mix tape...an art that is sorely lacking here.

The best things Territory really has going for it from this Bodhisattva's perspective are the souped up "new millennium" versions of "Adelaida" and "Babylon," but these in and of themselves aren't quite worth the price of admission except for the completist, even if "Adelaida 2000" is as achingly lovely a track as has ever been recoreded by anyone, anytime. ("Babylon 2000" is also good, but an even better version can be found on Full Moon, since the song really blossoms only when performed live.) Indeed, IMnotsoHO Territory is an object lesson in not letting artists get too closely involved in the marketing side of things. Industry flaks, the nefarious Kenny aside, really do often know better.

It needs to be stressed, however, that the foregoing assumes that you, O Hypothetical Reader, are standing before a rack full of BG discs in Brighton Beach or Moscow or Wherever and are wondering which one of the many, many albums is most deserving of your hard-earned greenbacks. If you are in Nebraska or Kuala Lumpur, say, this is doubtless not the case, in which case such Bodhisattavical carping and excessive scruples must be immediately set aside, especially if the once-planned, but now sidelined, American release of the album ever takes place. Territory, qua collection, is but so-so, but the individual songs taken on their own terms range from the very good to the absolutely sublime, and though heretical Bodhisattvas (namely, me) will stamp and scream, flailing nunchaku and shredding dharma right and left, the album does represent Boris's idea of a summation of sorts and therefore has my grudging respect.