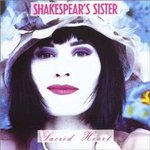 This abomination is far too hideous, yet (at the same time) insignificant to merit an actual review. Here, however are the liner notes about the felons responsible. Produced by Richard Feldman and Shakespears Sister, except "You're History" produced by Iovine/Feldman/Shakespears Sister.

Mixed at The Chapel (LA), Marcus (London) and The Grand Armee (Paris)

Recorded at The Church (London) and The Chapel (Los Angeles).