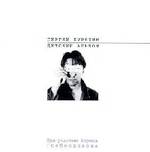 Surprise! Here's no mad washing maschines. Even greater surprise: This is popsa! Eleven songs of which two are sung by Boris, both in English: "Rock-Steady" and "Living in Real Time." The first one has another version, called "Stipan da Dyvchina," rougher & sung by Sergei... Some songs are like Carter USM, some like the Beatles...Then there's "Rock 'n Roll," which you can hear on Severov's website: He called it "Super(?)Dog," but I wrote "Surfin' Dog" on my casette after taping it, 'cause it's the Surfaris' "Surfin' Bird" starring dogs. Then some very nice and sweet children's songs by Sergei. BG on acoustic guitar. Nice collection!

If Maik wants to continue his musings on BG Singer of English he should actually request the Kuryokhin Children's Album (that's right k.p.tikka-ri, I have heard it). "Popsa" hardly begins to cover it...think BG does 1979: Pink Floyd's The Wall, ABBA, Styx, etc. The marimbas are back with a vengence. For all that, it's very strangely listenable, perhaps because completely tongue-in-cheek.