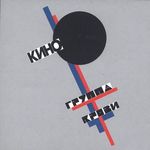 It was the hot summer of 1989 and I was a angry sixteen year old, sweating it out at my first job in a pet store in St. Paul, MN. One particularly sweltering Wednesday afternoon I picked up my first minimum-wage paycheck and headed for Cheapo Records to dig through the bins in search of punk rock. I found no punk that day, but I found something much better. I found Kino. Don't ask me what drew my attention to the poorly packaged album called Группа Крови. All I knew was that is was Russian and I had to have it, so hard-earned cash and album in hand I made my way to the cash register and sped home for my introduction to what was to become one of my favorite bands.

First of all, I should point out that despite the fact that Группа Кровы was Kino's only album to be released in the States and the ugly precedent set by other such ill-fated Russki Rok releases, it is still a great album. While later I came to appreciate the under-produced and stripped-down sound of Kino's other releases, the slick sound coming out of Joanna Stingray's Red Wave studio suits Kino quite well and made this an easy disk to listen to, despite the obvious language barrier. The fact that the American release came with the complete lyric translated by Alex Kahn (an outstanding man by the way. He and his wife Lyuba are largely responsible for my love of Petersburg and my knowedge of Russian underground culture) made it all the more accessible and easy to love.

Tsoi's lyrics contain a beautiful innocence and a deep understanding of the human soul and this truly shines through on Blood Type. From the start of the album the listener is drawn into a world that, while sad, is very, very real. Songs like "Война" ("War") or "Бошетунмай" ("Ganja") sum up feelings which transcend language, politics and nationality. If you are not familiar with the power of Tsoi's songwriting and the music of Kino, Blood Type is an excellent introduction.

A small side note: Fans of Sasha Titov's bass playing (something which anyone has every reason to love) might be disappointed by his absence. However, the fact that Igor Tichimorov (now with DDT) takes his place eases the sting. Tit may be a bass player's bass player, by Igor can more than hold his own.