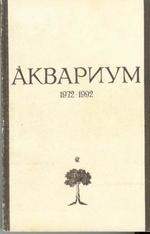 Friends and neighbors, this is a poorly printed, badly bound, and absolutely essential guide to Aquarium's first 20 years. I picked it up in St. Petersburg back in 1993, when they were pretty ubiquitous. Same purchase I picked up 14 and Yerofeyev's Moskva-Petushki—so, all in all, the Shopping Gods must have been watching over me that day.

Well, hell, that's nearly eight years ago now, though I can hardly believe it as I write it. The book is still is one piece, as am I; only a little worse for the wear, as am I also. Not long after I bought it, I recall going to the TaMtaM Club back when Seva Gakkel' still ran it. “Dva Samolyota” were playing, I think—they were very new and very popular—but that might have been a different night. Anyway, that was my first Close Encounter of the Aquarium Kind, and I didn't even get an autograph. My friend introduced Gakkel' as the ex-cellist of Aquarium, and I said the only thing I could think of about Aquarium, which was something like, “Oh, yeah, you guys were on Red Wave...good stuff.” He was very polite, and responded in English, “Thank you very much.”

There were rumors around Piter that summer that Boris was going to be filming a video with his new band high atop Gostinyi Dvor, kind of like U2 had recently done in New York. We followed several false leads, then I had to go up to Arkhangel'sk for a little while, and when I got back my friends told me I'd missed the big video event, which caused pedestrian chaos and traffic gridlock on Nevsky. I didn't believe them then and I still don't today. Anyway, to follow Dzhubchik's lead and quote from Spinal Tap…"enough of my gabbing...let's boogie!"

The Collection is lovingly, meticulously edited by Lyolya Sagareva, who should already be in our Hall of Fame for editing the “flawed but indispensable” song collection colloquilly known as 14. I've always considered the two to be companion pieces. Collection has a wonderfully patchwork tone, ranging from slangy colloquial to ponderously scholarly, but each extreme makes the other tolerable and most of the material here lands nicely in the middle. The book is generously illustrated and the black-and-white photos are rare and excellent, though they are sometimes indistinct due to the low-grade paper. There is a color reproduction of BG's “Hey look, I'm Bryan Ferry!” London tuxedo shot inside the front cover. You'll also find gems like a teenage Boris hanging with “George,” and a young, beardless Gakkel' with Caesar haircut and military togs. And so on.

Sagareva's one (but fundamental) flaw is that she chooses to view the entire history of Akvarium through the prizm of The BG Band—the Band, in her eyes, being the natural evolutionary result of everything that preceded it. History, of course, proved her wrong. This fallacy, however, informs the entire last section of the book, expecially Sagareva's dizzyingly self-indulgent "free-association" essays on individual songs off The Russian Album. With the exception of that part, the book is great.

Here are the contents, and I'm outta here:

PART I. THE SEVENTIES

1. A. Startsev. “The Story of Aquarium.” Essay.
2. Andrei Tropillo. Essay.
3. Tbilisi-80. An Excerpt from A. Troitsky's “Rock in the USSR.”
4. An Interview with V. Gakkel and B. Grebenshikov. From A. Zhitinsky's book, “Journeys of a Rock Dilettante.”
5. Aquarium in Moscow. An Excerpt from A. Troitsky's “Rock in the USSR.”
6. Alexander Lipnitsky. Interview.
7. Vsevolod Gakkel: The Phenomenon of Myth. Essay.
8. Apocrypha: Argentine Tango. A Drama in One Act.
9. Alexander Lyapin. Interview.
10. Alexander Titov. Interview.
11. Portraits: Olga Pershina. Evgeny Guberman. Pyotr Troshenkov. Sergei Kuryokhin. Essays.
12. “The View From the Lens”: A. Gunitsky interviews rock photographer Andrei “Willy” Usov. From the newsletter, “Aroks and Shter.”
13. Alexander Kussul: 1963-1986. Essay.
14. A. Matveyev. “A Chat with Boris Grebenshikov.” Samizdat, Jan. 1985.
15. Discography.

1. A Short Historical Survey. Essay.
2. Chronicle of the “BG Band.” Essay.
3. Oleg Sakmarov. Interview.
4. Texts and Contexts: An Attempt at an Analysis of the BG Band's Work. Essay.
5. Commentary. That, Which We Once Called Grebenshikov. Essay.