Stuffography Season of the Snake 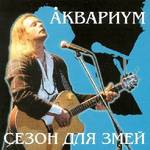 Season of the Snake

Season of the Snake poses the seminal question: who should be Grebenschikov's Dick? Yes, pun intended, but what I really have in mind is noted Grateful Dead achivist Dick Latvala, under whose auspices “Dick's Picks”—cd remasterings of epochal Dead concerts—have been released in the years since Jerry Garcia joined the, perhaps, Not-So-Grateful Dead. Latvala, besides being one of those obsessive-compulsive monomaniacs that it's handy to have around on occasion, is undoubtedly a connoisseur: the 1970 St. Valentines Day show, for instance, is a head-trip for which haply and happily no ingestibles or smoke-ables whatsoever are required for full enjoyment.

Grebenschikov, of course, is not dead. This is definitely a career set-back as far as his legend goes. What a god he'd be if he'd died, say, after Equinox, unseduced by Kenny and his demon-legions of New Wave has-beens. This, of course, would have deprived the world of Russian Album and Navigator, among masterpieces of lesser note, but would have assured BG a place in the beloved pantheon of Byronic Russian poet-seers for whom premature, usually grisly, death is an important prerequisite.

BG's greater misfortune, however, may be that he lacks a Dick. (No pun intended this time—that would be sacrilege! The Ladies Auxiliary knows different!) As unfortunate evidence I call to the attention of the assembled bodhisattvas the latest live Aquarium recording to find its way onto disc: Season of the Snake.

Let's start with the most obvious problem: the guy who remastered the concert did a really suck job…an unbelievably suck job, in fact, unless he was trying to reproduce the “bobina” experience by deliberately allowing tape hiss and between-song pops to remain intact. Though I myself came of age in that unhappy era when vinyl was disappearing but cds hadn't really taken off—and therefore people actually bought albums on cassette—I find this fact mind-reeling and really can't summon much in the way of nostalgia for it.

Then there's the disc's set list which is—let's be frank—not particularly inspired, much too heavy on Navigator, which is already very well represented on existing live albums. (There's a six song overlap with Cyclone's Center alone). OK, yes, a number of Snow Lion tracks—"Black Brahman," "Maksim the Forester," "Dubrovskii," and "The Great Railway Symphony"—appear for the first time, as far as I know, in live versions, but, at risk of offending Snow Lion diehards, who ever would have missed them? Aside from the fact that of these I number only "Dubrovskii" among the strongest Snow Lion tracks, not one of these live cuts equals the album version, or even comes at all close. What, then, is the point?

Live albums have only two useful functions in my cosmology: either they offer the unfamiliar, or they offer the familiar in an unfamiliar way. Last year's Prayer and Fasting, for instance, fulfilled both of these criteria admirably; Season of the Snake for the most part does neither; indeed, this is perhaps the most tentative and muddled-sounding concert line-up of Akvarium ever. On "Tree," for instance, there's way too much spastic bongo in the foreground and the flute sounds more like a kazoo than a flute. Now, like any true Akvarium fan, I'm not opposed to kazoos, but the kazoo should sound like a kazoo and the flute should sound like a flute. Then there is the Wilbur-iest "10 Arrows" ever, with some absolutely spurious drums and lots of deeply irritating electric guitar noodling that only goes to demonstrate precisely why this song belongs on Acoustics and only on Acoustics.

It's only on the blusier tracks that the band gets it together at all. "Old Russian Blues" burns down the house, finally giving the guitarist and drummer enough room to show what they can do, and including some frantic fiddling and a goose-honking horn that brings to mind the wonderful “до перестройки” era of Akvarium. Likewise, "Custom House Blues" is slowed down, horned up, and given a steel guitar sound that perfectly suits the song's sinisterly tongue-in-cheek lyrics. These two tracks, I'm forced to admit, might actually improve on other existing versions.

On "Flyer," on the other hand, the steel guitar just sounds annoying, but not nearly annoying as when it suddenly switches to cheesy arpeggios that sound for all the world like Queen, and a thump-thump-thumping drum that actually sounds as if the drummer has forgotten altogether which song he's playing. And on "Maksim the Forester" BG has the ol' Wilburizer turned to up to 10, the Julia Child setting, and the different band members seem to be carrying on a musical argument about what the proper tempo for the song might be. Still other songs—notably "Garçon №2" and "Navigator"—are much tighter and more pleasing to the ear, but so close to the album originals as to be of no particular interest to the collector.

No, no self-respecting Dick would have ever let this particular concert recording see the light of day. It's not terrible but neither is it particularly good—not anywhere nearly as good as any of the handful of live performances I've personally attended—and I can already tell that it's destined for the very lowest-rotation sphere of my Akvarium discs. Those of us with access to the bootleg bobina know that there are tons interesting things out there just begging for remastering and wide-release. Dates and Prices anyone? Why settle for bland mediocrity?

The solution, of course, is obvious: BG (and anyone else sitting on unreleased bobina) should immediately send all master tapes to the Bodhisattvas of Babylon—the sooner the better!—and we will be Dick. We should be Dick. We are Dick. Let us be Dick! Grebenschikov please take note.

Well this is more like it! Volume 2 has everything that I found lacking in Volume 1: non-canonical songs aplenty, wacky arrangements, and even clean production values making me wonder if I just got a bad pressing of Vol. 1 (which would serve me damn right for buying "нефирменный"). At any rate, it proves that of course Grebenschikov knows best and that I AM GOING TO HELL for doubting and blaspheming. Sigh. Another go-round on the Wheel of Life.

What do we have? Well for one thing we have two fine early verisons of songs destined for Lilith, "A Flimsy Imitation of Love" and "Captain White Snow." We also have a lovely flute and guitar version of "Guest"; the inevitable Vertinskii chesnut "Mrs. Irena" (a concert of this era would hardly have been complete without a Vertinskii chesnut); and a terrific "When the Pain Passes," one of those widely and mysteriously unacknowledged classics off of Archive, Book III.

BUT WAIT! THERE'S MORE! A lot more. For one thing there's "Letter to the Backwoods," a song so little-known that BG literally spells it out for some true believer in the audience keeping a set-list. It's a laid-back Parisian sort of accordion samba perfect for dancing along the banks of the Volga with the devushka/muzhina of your dreams on a warm summer's evening.

Then there's "I Know Places," which sounds damn familiar though I can't place it at the moment...like something that fell through the cracks of Russian Album. At any rate, it's just lovely: an ethereal flute and accordion motif leads you into the dark spaces between the stars. Also of unknown provenance is "The One That I Love," an accordion-driven Navigator-style meidation about life and love, jaunty-melancholy in precisely that Navigator way that I (and all right-thinking people) adore.

"Babylon," ever-green, appears in an extra-long, 8-minute, pass-the-doobie version at the end of which BG and somebody else start making Three Stooges noises which, I hardly need to add, is просто заебись! Ultra-rarity "Heavy Dancer" follows, chug-a-chuging, wah-wahing and James Brown yelping its way into sublimity, and "Sergei Il'ich" wraps things up grandly with a version that sounds nothing like the original on Triangle, and reminds us that September is indeed the season of the snake...as well as some stuff about reeds, vines and pearly nanny-goats.

In short, you need Volume 2 or your life, not to mention your Akvarium collection, is not complete. You might as well buy the whole darn thing and spare yourself the bad karma of нефирменный.