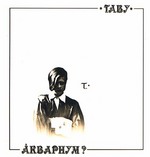 But for Radio Africa, Taboo would be a good candidate for the most unlikely album made anytime, anywhere by anyone. In fact, since it precedes RA chronologically, it may get the nod. What on earth, for instance, ever made a half-dozen white guys from the Leningrad of the Brezhnev era think that they could play reggae? Yet "Aristocrat" is great, good fun. Last one to the roof brings the sensimilla! Before we even get there, however, we've negotiated the agitated Tom Waits-ish nightmare of "Tonight," and the funkadelic "Empty Spaces," which hovers somewhere between the Crusaders and the Dead, and is well up there in any Akvariumophile's hit parade.

But wait, there's more! "Protect Your Prick," besides being sound advice which I endeavor to follow every day, is a brilliant sax-driven rave-up and a fitting tribute to devushki the world over. "Slice of Life" chugs along in a minor key like a train on fire with a saxophone buzzing in and out, up, down and around. And "Ashes" attempts and succeeds in sounding like the inside of the head of a schizophrenic—careful, listen to it too many times running and you may be dreaming of ashes as well.

Still not sold? "None of Us..." gives you fat, phat guitars and horns in what could be the last encore in the Western Saloon at the end of the Universe. "The Game is Fixed" is all electric guitars and Munchkin vocals—what more could you ask for? OK, so it's also just a little Huey Lewis and the News-ish…but we'll cut them some slack since it's just the one track. We close with "Sons of Silent Days," which is basically Pink Floyd before they sucked, and done to a T: swirling, trippy and evocative.

This is the album that went off like a nuclear device in late-Soviet period Russia. Buy it and see why.

Random notes: The SPb band "Ulitsy" has a modern cover of "Береги свой хой" on their (only?) album. They sing "хуй," of course, as is only right and proper. Good album. Join the Akvarium Society For The Protection of Pricks today!

"Radamaerl" was co-written by BG and Gakkel'.

We decided finally to record a real electric album—the songs we played live. The beginning of '82 was noteworthy for the first concert of realistically-electric Akvarium with Lyapin and Pyotr (a recording of that concert has now been released under the name Aroks i Shtyor). For lack of decent keyboards, thumbtacks were stuck in the hammers of a piano. Here, like in half of Radio Africa, the arrangements and (partly) the choice of musicians was left up to Kuryokhin—strictly speaking, this work wasn't so much work as utter pleasure. Somewhere around this time Exercises (with V. Chekasilyi) and Subterranean Culture (our own work) were recorded. I think that the other members of Akvarium were a little baffled by our [Kuryokhin and BG's] alliance, but what were we to do? Kuryokhin frowned upon the "overly direct rock" guitar of Lyapin. I think Lyapin would have been happy to play more, louder, and with less injection of piano. Personally, I (like the famous cat Leopold) wanted everybody to live as friends. All the same, the album turned out fantastically good. It was often necessary to seek refuge from passions during the Taboo sessions on the studio's balcony, where I wrote "Rock-and-Roll's Dead." But when the strange Lyapin/Kuryokhin combination worked (and I have to say that in actuality, they both respected the musical talents of the other quite a lot), it worked 100%.

It's a shame that the tape ran out while we were recording "The Sons of Silent Days," as that was all that remained to record. Naturally, in order to balance the general picture, Taboo ends with a Tolkien coda ("Radamaerl.")