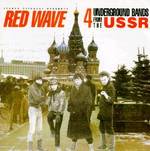 I bought this two-album collection at age 17 after a trip to the Soviet Union; otherwise, I would have found it quite easy to resist the menu-like cover and black-and-white pictures of four snow-booted Samizdaniye (in various poses: arms folded, hand-puppet/dancing, square-stanced, and beckoning—guess which one is ours) superimposed on a color photo of Red Square. Because if they actually were all standing there together on Red Square being photographed by Joanna Stingray, that guard in the background would have shot them, I presume. Anyway, I bought it.

Oh, and the back of the album. This is why I miss albums. It pictures all the Underground Men standing in the snow in front of [Travelers to Russia, please identify the church/museum for me…Dzhrew says "I think it's the church that's a one-minute walk from Dom Knigi along the Griboyedov Canal in SPB, viewed from the huge park that's back there," but that isn't really an ID]. Our Aquarium boys take up half the picture, of course. Shocking-blond Joanna is planted in the middle with super head-band-man Boris (not that I knew it was Boris except for the label: "BORIS") standing right behind her. Among Joanna's acknowledgements right below: "To my secret—I love you—maybe?" Say no more. I bought it.

What's on the album? you ask. Like a 17-year-old with a 15-word Russian vocabulary is really going to notice that. Well, Aquarium is Side A of the first record, and Kino, Side B. Aquarium songs are:

Obviously I liked them enough to correct the liner-note translation of "Pepel." Now I think the songs were intentionally mistranslated to plant the sick seed of guru-madness in young Reagan-era innocents. My effectiveness grows with every day, not "from day to day." Hmph, how could they not know that?

Kino I liked okay, but I hadn't yet the raw wretchedness of life-experience to appreciate them. The second album in the set contains two bands whose listenability is directly linked to their shelf life: Alisa and Strange Games. Alisa guy, "Kostya," is pictured on the inside with KISS-like facial, and he sings with that nasal hostility Russian rockers so seem to adore. But Alisa's first song, "Experimentator," was relatively easy for me to pick up. I kept thinking I would be able to use the chorus in a Russian conversation some day:

But I never did. I say grab the album if you find it, if just for the picture of "Boris aged 5" on the inside. What a cutie. I love him—maybe?

Footnote: Alexander (Sasha) Titov plays bass on the Kino portion of the album also. And a gentleman named "Afrika Bugaev" plays in their "industrial percussion section," who Dzhrew believes to be the dude the song "Kapitan Afrika" is about. [correctly, as it transpires. -ed.]