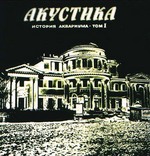 In fact, if I had to bring one and only one album with me to the isolation chamber, it would be Acoustics.

Musically, lyrically, spiritually, and everwhichwayually, Acoustics demonstrates all that is great in Akvarium. It is by turns rhythmic and disjointed in its song structures, obscure and pointed in lyrics, serious and goofy in its everything.

It opens with "The Man Who Stole the Rain," a lyrically obscure (is it about Brezhnev? or just some lame-ass dude?) melody piece featuring Boris on guitar, somebody whacking bongos, somebody else providing light backing vocals, and "water" playing itself. Like Acoustics, it ends too soon.

"It Will All Be Better" is a brilliant anti-love song... or maybe a love song, depending on how you take it.

Your husband was like a god
but now he's like a shadow.
Now he simply can't do it
where before he was too lazy.
I know it's karma
and nothing can stand in its way
but it will all be better
when you go away.

Indeed. In the 80's, university students would argue about whether Boris' lyrics "meant anything" and many of these students, now grown up, will still deliver their unchanged opinions whenever the subject comes up. "It will all be better" and other songs on Acoustics make such arguments moot; to any student of Rock traditions (such as Boris) the lyrical qualities which seemed obscure to these students are old, familiar friends.

"Count Garcia": A piece of traditional Akvarium wackiness. I would love to hear a recording of an extended jam version of this (a la Rutman).

"Song for a New Existence": Boris sings to the outside world, where they have everything. One of the great early Akvarium "this is our life" portraits masquerades as a children's song about drunkards who climb the cornice.

...how you live there
you have a hippopotamus
and we're in the cupboard
with holes in our pockets
and here it's strange, it's simply strange

"Ivanov": Another daily life portrait, this time with no masquerade just beauty. Acoustic guitar and cello sing about everyman Ivanov, who wakes up Monday morning with a hangover, gets fined for not having his fare while reading Sartre on the bus, goes home to his communal corridor between the kitchen and the bathroom (always empty, always full), where he receives friends who bring satchels of portwine (the artist/drunkard's cheap-ass favorite) then stay all night (the good friends and the prettier ladies) until Ivanov wakes in the morning and it's Monday morning all over again and always.

"Hold on to the Roots": Another typical day in St. Pete, with options and events even though nothing's going on.

You can buy a new hi-fi
or simply go to the grocery store
and meditate on the ceiling
all covered in cheap wine
or stick your head in the TV set
and think you'll be smarter
but in order to stand
I have to hold on to the roots.

And onward it goes. "My Star," the slightly kitchy mini-Tolkein "10 Arrows" (the only song which truly deserves the "sounds like a Dead song" observation), "Why the Sky Doesn't Fall" (winner of the award for "most brilliant lyrical application of the name 'Alexander Sergeiivich'"), "Steel," with its beautiful day beginning "quietly and strangely," and onward.

Yet for all 16 songs (including the two "bonus tracks," one of which, "Contradance" is vital, while the other is hilarious) this is a short album—less than 40 minutes. For a long time the Bodhisattvas labored under the delusion that this album could convert the most intransigent of uncoverted to the holy ways of Akvarium. We were wrong, in part because of the album's length and in part because of its nature.

Acoustics is a beautiful album, essential to any collection—not just to an Akvarium fan's collection. However, as a first listen for the uninformed, it's an album which is too easy to compare. After all, it is an acoustic album... and any acoustic rock album is going to leave lots of room for the defensive, "that sounds like [fill in name of listener's acoustic association]" first-time comment so common among Americans who encounter anything new. (I'm not being snotty here; any Bodhisattva worth his or her rynok-thumping can tell you the three stages of

But Acoustics roots lie in the living room concerts where Akvarium was born. The environment in Rock and Roll St. Pete during the 1970's and '80's was unique and Acoustics captures that unique spirit. And there is no better place than Acoustics to pursue your understanding of that spirit, whether you're an unwashed slob without knowledge of Slavs or a Bodhisattva with infinite comprehension... like myself.

NOTES: "Count Garcia" and "To Friends" were co-written by BG and Dzhorzh (George). "BG and …" wrote "10 Arrows," whatever that means. I think the elipses might stand for "some dude from the Society for Creative Anachronism."

Here is the immortalization of the songs that were played at Akvarium's acoustic home concerts from '78 to '86. In concert, naturally, they sounded much more immediate—but on the recordings, we played only the instruments we needed. In concert, everyone always played simultaneously, giving that feel of happy mayhem that was characteristic of Akvarium at the time. It was all recorded at the same time as Triangle and Electricity—the spring, summer, and autumn of '81. A few songs were recorded even earlier, at the time of Tropillo's first heroic attempts to record Akvarium in the very heart of the enemy—right smack in Melodiya's studio ("Ivanov," and so on). For many years this was the established general principle of Akvarium—if there's a studio, it's worth spending all your free time there; something interesting is bound happen on its own. Essentially, our best recordings were always made aside from our "necessary work," in the context of relaxation. Extraconceptual, as some might say.