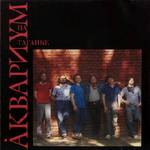 At the Taganka is an album that I would describe as ideal for "Akvarium purists."

What makes this a back-handed compliment—if compliment it be—is that "Akvarium purist" is a glorious oxymoron along the lines of "Soviet economy" or "the government of Primorskii Krai," and therefore At the Taganka may be the ideal album for a creature that doesn't exist.

For what is the original Akvarium if not a diverse, multi-faceted, extravagant, over-the-top collective of musical chameleons? What we value in them, as in all the best bands, is that their discography is a trajectory, not a fixed point, like it is for so many niche bands and the one-hit wonders on Top 40 radio. Akvarium were gloriously, musically, polymorphously perverse—rarely, if ever, content to repeat past successes or pander to the conventions of rock-stardom. What's still more impressive, they mangaged to pull this off without the oh-so-self-conscious eclecticism we see in so many of today's popular acts, like Beck, Moby or Madonna. (Truth be told, it is just such a calculated ecleticism that mars many of BG's more recent efforts). Ergo, how is it possible to be a purist of a band whose essence is a heterogeneous, wonderous impurity?

I digress. Whether or not they exist, what makes this album for "purists" is that what we have here is Akvarium stripped down to its barest bones. No bells, no whistles. No hooters, no tooters. No kazoos or "tchoos." No Munchkin choruses. No brass bands. No wigged-out Kuryokhin keyboard solos. No rockin'-out Lyapin electric guitar solos. (Indeed, no Kuryokhin or Lyapin at all, so that whole source of creative tension in early Akvarium is effectively wiped off the map.)

What we are left with is an album that is considerably more "acoustic" than Acoustics. Acoustic guitar, cello, flute, bongos, bass (with just the occasional touch of harmonica, violin or piano) and BG's plangent vocals are all there is, baby. The effect is lean and mean, powerful and eerie...but also, to anyone well-versed in the glories of Radio Africa, Silver Day, etc., missing something.

Think of granola. Granola is a wonderful thing. But how much more wonderful is it with fresh strawberries, bananas, mangoes and yoghurt? At the Taganka is plain granola: nutritious, healthful, tasty...but I can never escape the feeling that it's not nearly as tasty as it could be.

This feeling is doubtless augmented by a couple salient facts that need to be addressed before I can go any further. Firstly,Taganka cannot be considered "primary source" material at all, as almost all of the the songs appeared originally on other albums. Secondly, the album is a weird kind of hybrid: if any of the sessions from which the tracks were drawn were actually recorded in front of a live audience at the Taganka theater, all indications of such were carefully excised during the mastering process. The effect, therefore, whether or not it was actually done that way, is of "live recordings" of dress-rehearsals; there's no sense at all of the shared excitement and bond between performer and audience that one finds in more conventional concert recordings.

Unfortunately, however, the quality of the recordings themselves are about what you'd expect for live-takes in mid-80's Moscow...which is to say, not that great. At best, the sound quality is slightly tinny, at worst it can sound like an over-extended P.A. system in some Podunk high-school gym. (This is most noticable with the vocal track on "The Unicorn Hunt.") Those requiring the most exacting standards of high-fidelity may be disappointed in this album.

So why buy it all, you may be asking? O Ye of little Faith! Back to remedial koans for you! For, of course, there is also a great deal to recommend Taganka and not buying it would be, simply put, the height of folly.

The key is the songs themselves, a more-than-generous helping of 21 of them, with "all-time classics" and "little-known gems" about equally represented. For the Akvarium novice, At the Taganka is terrific because it gathers songs from all the important early albums: Acoustics, Electricity, Blue Album, Ichthyology, Ten Arrows, and Archive, as well as much harder-to-find songs, such as the jaunty, sarcastic "Wasting My Time" and the moving "For Those Who Are In Love." (Indeed, Taganka represents not only the most accessible, but also the most definitive versions of those two splendid songs.)

For the dedicated Bodhisattva—who, it should go without saying, already owns all and loves all of the above—there is even more to love, with all Taganka's unfamiliar takes on familiar songs. "Village," from December's Children gets a neat-o extended treatment, which ends in a dizzying, delicious cacaphony of flute, cello, guitar and recorder (who's playing the recorder, I wonder?). "Rock-n-roll Hero" is sheer genius, a quantum leap better than the Blue Album original, with a bluesy guitar, understated piano and a smokey vocals; it slows the song down to less-than-half-speed and turns what was a bouncy goof of a song into a rapturous cri de coeur.

In a similar vein, if you ask me, the nakedly acoustic "Electricity" is a considerable improvement on the busy, juiced-up Silver Day studio-version. "Fly, my Angel, Fly," is another highlight, with an electrifying Gakkel' "greencello" solo that makes one think he kicks all kind of ass on that piker, Yo-Yo Ma: this is the version of the song that would be a "must" on any Akvarium compilation that I was responsible for making. This is followed by another under-appreciated joy from Ichthyology, "Room Full of Mirrors" that also improves upon the original: here it's just BG, his guitar and harmonica commending themselves to your undivided attention and love. And who could turn up their nose at stirring renditions of "25 to 10," "Electric Dog" and "Mochalkin Blues," three of everybody's favorite Akvarium songs, falling one after the other like so many cut-diamonds strewn onto black velvet? Not me, bucko!

And so much more besides: space condiserations prevent me from enthusing about all the songs, but—trust me—they're all good or great. And so what, then, if At the Taganka doesn't have the sonic richness or expansiveness of the studio ablums? My most important criterion for a great live album is more than fulfilled: the versions on Taganka are all different than the "canonical" versions, and what they lack in complexity is more than made up for in sheer, naked lovliness.

Conclusion: We all need to be Akvarium purists...at least on occasion. Start the process of ritual purification today by giving At the Taganka a few salutary spins.

Original review: Dzhrew says "good stuff" but laments the lack of concert ambiance (no applause) and the patchwork feel.

Later, Dzhrew disagrees with himself. "Essential. Absolutely." Lamely, he adds, "It's just that everything on it is good. Like duh." Like Duh, indeed.

The liner notes identify some clever (хитроёбанный) form of restoration that was performed on the original tapes: "Reston-Master-Stereo." So you audiophiles can turn your noses up or down at whatever the hell that is.