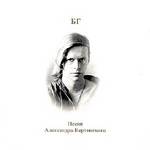 Dzhon whips out his lingham and beats me with it, intoning: "Spare guitar??" Ради Бога, it's virtually a capella, and most of the songs sound like dirges sung at 3:00 a.m., when half the party has passed out, and the other half is bleary-eyed, bored and maudlin. A snoozer. I'll also note that there's a better version of the best song, "Without Women" on Captain Voronin.

This record was recorded in 1993 in St. Petersburg. Boris has this to say in the liner notes, "I've sung the songs of Vertinsky as long as I can remember singing. I am grateful for the occasion, finally, that has compelled me to record them—and thanks to you, those who will listen to them. They are neither his, nor mine. They are Ours."

According to Russman, "Jamais" means "never" in French (see the song "Flaubert's Parrot"). Pani Momchalka chimes in with assistance in translating the Polish song title.

Good info about Vertinsky, including a short bio, is to be found on this Russian web-page.

There can be no possible justification for this offence against public taste. That many of my friends requested these songs and that they'd blossomed forth in our concerts even in 1983 was no pretext to climb into a studio with them…or, if one did so anyway, then to fail to spend about ten times the amount time there recording them. These songs had always (since I was 10 years old) been esteemed by me; I often sang them late at night, and they deserved more [from me].

I'll add that singing these songs in various cities and villages of Russia was a true pleasure—not least because the hall's reaction was always unpredictable and told us a lot about the how matters stood in the town. Thus, when I sang “Without Women,” for instance, in Novosibirsk, the audience burst into applause after the phrase “single malt whisky”; in Moscow the same thing happened when I reached the words “my cozy bachelor's flat”; and there was that time in Samara when the words “hysterical betrayals and belated regrets” were met with an ovation. In Stavropol those that understood clapped at the line “to wake-up alone”; while in Barnaul—truly, a place incapable of relating to sentimentality divorced from real life—the audience kept tensely silent.