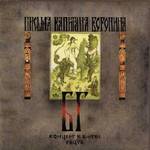 Letters carry news, and there's always a little bad mixed in with the good. So, deep breath, and the bad news first. This album has long held an exalted rank in the Bodhisattva pantheon thanks to its superb set-list and the BG Band's inspired, impassioned performance. And justly so. Dusting it off recently, though, it is the considered opinion of this reviewer that it sounds, indeed, very "dusty": the sound quality of the recording really isn't a lick better than the bootleg-quality that characterized many of the earliest Akvarium albums. We understand and empathize with the reasons sound quality was touch-and-go for Boris & Co. in 1981, but one would have hoped that by 1991, his "subterranean" days firmly behind him, Boris could have bankrolled something a bit better. Ded Sakmarov's flute and oboe, in particular, completely overwhelm whatever rudimentary amplification system is being used for them and there's way, way too much white noise just about everywhere; inevitably the level of hissiness and general lack of high fidelity, willy-nilly, somewhat diminishes one's enjoyment of the album.

Happily, there is still that killer set-list. Господи! It's centered on Russian Album, naturally enough, since that's the contemporaneous studio effort: "Swallow," "Sirin," "Wolves and Ravens," "Milady," "Nikita of Ryazan" and "Elizaveta" all put in appearances towards the middle of the set. And they're all very, very good: generally similar to the studio versions, but different enough to be of interest to any Russian Album aficianado. (And, really, who isn't a Russian Album aficianado?) The extended version of "Sirin" and the slower, gentler version of "Swallow" are particularly memorable.

But splendid as these songs are, there's much more to Captain Voronin than just Russian Album live. Take, just for starters, "Ancient Blood" (which is, it happens, the album's "starter"). The proverbial "rusty squeeze-box" and a plaintive oboe lead us into a musically simple, but lyrically knotty, three-chord acoustic ballad about catching falling stars in the palm of one's hand and other seeming impossibilities of love. The song isn't quite A-list, but the interplay between Schurakov's zippy accordion and Ded's wailing oboe on the bridges makes it a joy, and—astonishingly—it's unique to The Letters of Captain Voronin, not existing in a studio version at all. All songwriters' throw-aways should sound half so good.

Indisputably A-list, on the other hand, is the next song on the album, "When the Pain Passes." Exquisite accordion and (admittedly, over-amped, here as elsewhere) flute anchor this oughta-be-classic, one of the most moving in the entire Grebenschikov canon. This version is at least as good as the string-driven one to be found on Archive, Tome III, and would probably get the nod for best available version if the general sound quality on Voronin as a whole were just a smidge better.

This is followed by another song to be found here and only here (if one discounts obscure bootlegs like Concert at Mezhkniga): the propulsive song-story "General Skobelev." The song has little, if anything, to do with the actual General Skobelev, but Schurakov's semi-crazed accordion again makes it a delight. Song qua song, though, it's not a patch on "Captain Voronin," one of my personal favorites. "Captain Voronin" is a Grebenschikov must-hear and includes some of his best lyrics...and it's another song that—if, like a proper Bodhisattva, you disdain the various "Best of..." compilations—is hard to find (only here or on the Black Rose soundtrack). Acoustic guitar, accordion and very, very understated percussion keep things beautifully clean and simple for this rendition.

Amazingly, though, that's only the beginning of the bag of tricks that is The Letters of Captain Voronin. For, after checking in with those always-diverting "15 Naked Babes," we get two more new songs—"To a Critic" and "Russian Symphony"—neither of which were ever to appear on a studio album. True, the former is a bit of a goof, with a silly tip-toeing-through-the-daffodils flute intro and bridge, and lyrics that are basically a big "фиг тебе!" to all those who think they know Boris better than he knows himself. Unlike "Ancient Blood," it's probably a throw-away that should have been thrown away (he said, being a sometime "critic" himself...) But "Russian Symphony," for its part, is a serendipitous pleasure: with lyrics by Anatoli Gusnitsky, BG's old partner-in-crime from his student days, it's like four songs wrapped into one, each verse played and sung in a slightly different style. It starts with a Mitki-style accordion and flute combo, shifts briefly up-tempo to a jaunty, toe-tapping tune and then, after returning with a lonesome oboe, ends in a wistful, smoky cabaret style. You'd never know that the group was playing it for the very first time ever...(see "Boris' Notes" below).

The greatest pleasure among the rarities, though, has to be "Ivan and Danilo," one of the catchiest songs BG has ever penned. Why this song doesn't have a higher profile in the Akvarium canon is one of those koans that the gurus like to occupy themselves with as they spin their prayer wheels and contemplate the Highest Mysteries. (In particular, one wonders how it failed to show up on any one of the APXUB albums.) Granted, the lyrics are trifle opaque...but I'm sure they wouldn't be if I ever took the trouble to read BG's short story of the same name (to be found in the Not Songs anthology, among other places). Anyway, it's a jaunty, up-tempo, unselfconsciously fun song that inevitably makes me hit "repeat" on my remote control.

This is followed by the predictable brace of Vertinsky covers—a staple of concerts of this period—but then there are two more songs deserving of special note, both (again!) for all practical purposes unique to this album. "Angel" is an acoustic love song that sounds as if it could have been an Equinox outtake. I like it very much. Better still, though, is "Joyful Day," which is more or less a bonus track. Whether or not the song was part of the Vyatka concert, the recording is a studio creation: even if it wasn't listed as such in the liner notes, one can tell instantaneously simply by the quality of the sound. With its lilting flute, quiet guitar and subtle strings, it's a gem of song, BG singing with wistful melancholy in anticipation of better times to come.

So there you have the collected correspondence of Capt. Voronin: exotic missives from all corners of the Akvarium globe. Yes, you sometimes have to grin and bear the quality of the sound, but it is otherwise probably the best widely-available full-band live recording of Akvarium in the 90's.

The liner notes comment thus on the BG band: "The group played 127 concerts in 71 Russian cities, recorded Russian Album, and having fulfilled its partisan function, ceased to exist on 11 August, 1992."

"Joyful Day" was recorded in the studio at Fontanka 39 in SPb in June 1991. The rest of the disc comes from the October 1991 show in Kirov. These dates are important because the Russian Album sessions weren't until February of 1992, so BG is not, as one might have assumed, promoting an album he'd already released; rather The Letters of Captain Voronin, larded as it is with new material, is a dry-run for the recording sessions still to come, and the audience is actually hearing these songs for the very first time. Pretty nifty, huh?

Besides being in the aforementioned hard-to-read faux-Old Church Slavonic font, let it be noted that the liner notes are also very misleading. For years we had the six stalwarts of the "BG Band" listed as the musicians for this album, but, as BG makes clear in his notes (translated below), only four actually played at the Vyatka concert. Why they would then choose this particular concert to represent the Russian Album tour is thus very puzzling—surely, this isn't the only show they attempted to record?—but it does, at any rate, explain the absence of strings on all the tracks except "Joyful Day" (in stark contrast, of course, to the string-drenched expanses of Russian Album itself).

The concert recording fails to convey many of the nuances of the group. "Russian Symphony," for instance, was performed in Vyatka for the first time, even to the extent that no one could have predicted which chords would pop out the next second—there was, however, some kind of telepathic connection going on. And, at the time of "To a Critic," our soundman crawled out onto the stage and, still crawling, performed some kind of Indian national folk-dance (kind of like the Dance of the Little Swans in reverse). Ryusha (Andrei Reshetin) wasn't in Vyatka; probably he'd had it with hopping swallow-style, fully-clothed into a bath full of roses, and therefore hightailed it to Germany to relax and perform old-fashioned music in authentic manner. His old Vyatka acquaintance S. Ryzhenko was urgently called in to sub, but he couldn't stand the powerful psychic stresses and we therefore played the concert as a quartet.

We were cheerfully ferried about Russia by "barge-haulers." As a rule, morning in a new city began with a visit to the local Orthodox cathedral—and, even to this day, I probably remember which churches are in which cities, and in which corners of which churches hang which icons. Already in June of '91 we'd played at Solovki (where we took the expensive icon we'd purchased in Nizhny, "The Appearance of the Blessed Mother to Andrei Bogolyubskii"). The concert was brightly illuminated by the sparks and burning wires on the opposite wall: the premises, a former refectory (similar, they say, to those described in Solzhenitsyn's chronicles) hadn't been that warm in decades, the walls thawed, and the wires began to hum. Monks crept into the concert on the q.t. (For balance, it also ought to be noted that on the way to Solovki we, along with the captain of the ice-breaker carrying us there, drank all the spirit out of the ship's compass...so eyewitnesses attest, at any rate.) In the evenings after the concerts, after a strange quantity of vodka, we debated the history of Russian theology, the theory and practice of icon-painting, and other mixed-up topics. They say that not everybody who saw it was able to stomach it.

This lasted about half a year. But already by the summer of '92 it began to become clear that something new was emerging. A strange prophecy came to us, and Ded, Alexei Pavlovich and I set off on a "concert pilgrimage" to the Holy Land.