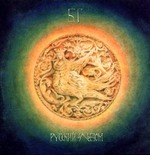 Why have we, the collected Bodhisattvas of Babylon in all our omniscience, been afraid to review Russian Album? We wear our armor of arcana boldly when expounding on topics historical and hysterical. We show no fear when confronted with the task of describing Grebenshikovian excesses, whether bizarrely appealing, unbelievably horrifying, or just plain inexplicable. We can even leap into the unknown realms of oddball spinoffs with scarcely a pause to pray for protection.

But Russian album has none of the excesses which make us bold. Don't get me wrong: it does have excesses. It is excessively beautiful, expressive, melodic, poetic...

This is the pinnacle of Akvarium's immense and diverse catalog, and I, for one, find that when I stand up to try to describe it, my lingham goes flaccid before the enormity of the task.

It took me a long time to buy this album. When I discovered Akvarium I knew no Russian whatsoever. With no visible bodhisattva to guide me I stumbled from kiosk to kiosk, stricken by Radio Africa, Snow Lion and Navigator, looking for more. Russian Album's cover did not grab my attention, and my first written Russian word, Akvarium, was not on the label.

A year later, living in Moscow, far gone into Lamahood and already at work on version one of the Bodhisattvas of Babylon, I finally bought Russian Album, expecting one of the Boris Plus oddities I'd come to expect from Borya. The strains of "Orchestrating" suggested I was indeed in for an odd solo album. But as the Rajoki fell into silence and with the opening chords of "Nikita Ryazanski," everything changed.

Look, Lord:
A fortress, and from the fortress—fear
And we are children in your hands.
Teach us to see you
In every misfortune.
Take, Lord, this bread and wine.
Watch, Lord, as we dive to the bottom.
Teach us to breathe underwater.

This album emerges from the heart of the heart of darkness, the early years of the 90's. Perestroika and the fall are history, while the present and the foreseeable future belong to the new robber barons and the pseudo-culture of the buzzcut thug. "Nikita Ryazanski" references the mythological Russian Soul in the form of those pioneering spirits who built cities without nails and then walked away from their cities to find God. Eight years after the album's release, little has changed, and the song's prayer still holds true: if you want to survive, learn to breathe underwater and to see God in misfortune because we don't yet know if we've seen the bottom.

"Milady" covers the same ground on a more personal note. Who is Milady? The motherland as disappointed lover.

Your Ladyship ...
Remember how we built this house?
Fine it was, we thought—yes, but hollow.
[skipping ahead...] But now it seems ...
We've known the way that silver feels,
And now there will be acid to swallow.

So we leave the wife at home and head out in "Lastochka," where Eagle Scout Boris rides his trusty acoustic horse to wilburize warnings of war (his posse riding along, playing a marching song and whistling in the dark).

Sing, little swallow, sing
While we beat the drum
Bright hawks everywhere
As you look up and down
The hawk's in the sky
And a woman gives birth
Nothing has changed
Everything as always.

"Hey, guys," Boris says, "we've been here before." And his corrolary to that, echoed through the entire album, is "and each time we've proven we're just so damn stubborn that we'll endure."

The "pure star" of "Wolves and Ravens" is the faraway, perhaps mythical, goal of this fairy tale's heroes... and, it turns out, perhaps also of its villains. Toward the end of the song, the singer makes a deal with the Wolves and Ravens: he'll shelter them and they'll shelter him, "So that somebody can reach this pure star." Ummm... is it just me, or did Boris just cross the Pete Townshend rock & roll line and offer himself up as a tasty sacrificial Christ? The everyRussianman hero has decided to work with the predators and scavengers for the good of the motherland, even if "working with" them means working as food.

But, as "Stampeding Horses" notes, there's not enough Boris to feed them all.

But how will I feed the horses if they aren't satisfied?
How do you water them if they don't drink water?
Silken manes, perfumed and curled;
Sharp hooves, and blood-colored tracks.
And here are all my comrades—vodka without the bread,
One brother Sirin, the other the Savior,
And the third who wanted to go to heaven under his own power,
Got drunk, drugged out—and that's the whole story.

OK, so we know the history. We know we've been through this before and that we'll see ourselves through it this time... and we know that our endurance, our survival, may be comforting but it doesn't make the situation any better. "Elizabeth," translated by our own Elizaveta, reminds us that we are not supposed to talk about these things. We're supposed to shrug, mention the unfathomable Russian soul, and get on with the endurance business.

Tell me, then, why
The statues fell down, to the wires,
Why did we duel and leave,
Throats to the lash?
She put her finger to my lips
And whispered: “Do, what you want,
But don't speak, words are death;
Are death…”

And so it goes. Allen Ginsberg graphically described the poem "Howl" as being "built like a brick shithouse." The similarly built Russian Album begins with wailing Rajoki followed closely by an up-tempo prayer and ends with an up-tempo prayer followed by more wailing horns.

That final prayer, "Volga Boatsman" is a bit controversial among the Bodhisattva, at least one of whom feels it sounds an off note on an otherwise perfect album. But this three-chord anthem seems to me to be the perfect ending to the album. In J. Fred Baylin's translation (from Planet Aquarium):

Down by the Volga walks the lonely Boatsman
Towing on his back that celestial plain
From the heavens above, the Lord shows his hand
But the Boatsman simply laughs—the hand contains cocaine.
And down the Volga—memories of the Golden Horde...

Memories of the Golden Horde indeed. This is not an album which asks, "how can you understand this since you don't have our Big Russian Soul"? Our Boris of 1992 has the Big Russian Soul by both nurture and nature, but he also has the perspective to understand the particularities and universality of that soul's predicament, and to see the present in light of the past.

These are dark songs for dark times, my friends, but not without hope. The hope offered here is personal, spiritual, and beautiful. After reading the lyrics quoted above, you may be surprised at the beauty of the music. This is not an album of self-important mourning. Russian Album acknowledges the full horror of the present and the dark possibilities of the foreseeable future, but finds a perverse solace in dark times past. And genuine hope from genuine darkness is always beautiful.

I could describe that beauty—its instrumentation, its composition, the effect it gives of a long, lone camera's eye flight across Russia's plains, mountains, blocks of apartments, acres of Dachas... But I won't. Listen to it. Experience it for yourself.

Dzhrew concurs: Russian Album is Semyon's favorite. He cried during "Кони Беспредела" at a Vlad concert, as did many others. I really should whip out my lingham and translate this album, because the words are way important. Moving, sad, bitter… it's a perestroika thing.

Maybe Boris still had some old "Akvarium" letterhead and business cards he wanted to use?

Not to be confused with Akvarium, this is really "БГ"...which is to say the "БГ БЭНД" (the same people, but a different mission). More than a hundred interpretations of this puzzling abbreviation exist ("Reckless Abandon Guaranteed" is the kindest). When Akvarium-80 formally disbanded in April '91, new songs poured forth like out of bucket (probably the aura of the Akvarium name had been so weighing us down that it had effectively retarded new artistic impulses), and the necessity came about for a small and highly mobile outfit.

It all started with "Milady" and "Nikita." Ryusha, Ded, Schurakov and I sat around in DK Svyazi and, for the first time in many years, rehearsed. Ded said "Why don't we go perform a concert in Kazan?" This simple phrase brought about half a year's worth of touring and a turn towards native (Russian) music.

Our repetoire had to be invented along the way: often, right before a concert. I felt the need to put as much distance as possible between myself and Akvarium. It would have been absurd to dream up a totally new name, but one had to put something on the posters: therefore we opted for the simplest variant possible. We spent the spring, summer and fall on the road and recorded Russian Album during this period. Our original acoustic quartet was soon, as usual, rounded out by Beryozovoy (on bass) and, at the very end of the year, Pyotr (on drums). We were so eager to play that I can't even remember when we finally showed up at home. My thanks to all the cities and all the roads which inspired these songs. It's the archetypal Russian view: a church seen through a bottle of vodka. Reckless abandon is guaranteed.

The recording of Russian Album began in early '92 at the Moscow Radio House, at their kind invitation. Once again we were thrust into the atmosphere of a "state" recording studio, but in Moscow this time, which I loved, in contrast to bureaucratic St. Petersburg: people in Moscow had long ago learned to live with the "government" and related to it in a human way, as they would to bad weather, say. We clashed with the government—Russia's internal empire—both coming and going; but with Moscow's guardians one could always reach a human agreement.

The first people we bumped into in the corridors of the House of Radio were our acquaintances from Kuryokhin's time, Slava Gayvoronsky and Volodya Volkov—accordingly, tuba and double bass—and "Sirin, Alkonost, Gamion" achieved its final form. In the future—already at the Fontanka studio—Gayvoronsky would play on our version of "I Want to Be With You" and appear on Ramses IV; Volkov—or, more properly, one of his bass lines—once upon a time inspired our ancient magnum opus "We'll Never Get Any Older."

Well, along the way to making the record, on the train from St. Petersburg to Moscow, we "accidently" ran across Alexei Pavlovich Zubarev, our old, respected acquaintance from "Season of Rain" (and, by unverifiable rumors, a distant descendant of Hobbits). Over a bottle of cognac he told us that he'd left "Season" and was presently free. He always had his guitar about him; the next day he dropped by the House of Radio and added it to "Stampeding Horses." He thereby decided the question of his participation himself.