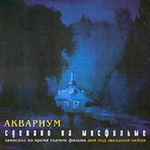 There comes a point when even the all-wise Bodhisattva may stray from the One True Path and find him or herself asking "Is there such a thing as owning too many Akvarium albums?" These moments of doubt—of wandering in a spiritual desert—are evidence that despite their godlike qualities the Bodhisattvas are, after all, human. Perhaps it's been a rough day at the temple? Perhaps His Illustriousness' most recent studio releases have been just a tad disappointing? Perhaps the morning's yak milk was a bit off?

Happily, such doubts of the errant Bodhisattva are easily allayed by the discovery of yet another obscure, forgotten Akvarium artifact waiting to be unearthed: in this case, Made at Mosfilm, 73 minutes worth of material "recorded at the time of the filming of Home Under a Starry Sky," as the album's subtitle notes.

(Why this circumlocution? Чёрт знает. Perhaps it's because most of the music recorded never made it into the movie; perhaps it's because, unlike Assa and Black Rose, no one bothered to release an official "soundtrack" for the movie during its theatrical release. Probably both of the above...but it's likely to remain in doubt for some time since Home Under a Starry Sky itself remains an unexcavated layer of Babylon, awaiting the attentions of a dedicated Russian cinéaste.)

Of course, when digging this deeply into the Akvarium midden expectations are not high. Nor should they be...for if there were wonders here as splendiferous and multifarious as those to be found on the Black Rose soundtrack would BG really have waited until 2000 to release them? He would not. And, in point of fact, Mosfilm is neither for the uninitiated, nor even for the Pilgrim who owns most, but not all, of the core albums that make up our Orginal Akvarium, APXUB and New Akvarium categories.

For those who have sashayed further along the Road to Nirvana, however, Mosfilm offers a bit o' this, a bit o' that, and a bit o' the other thing...intriguing on any number of levels. First and foremost is the fact that the music appears to have been recorded sometime in 1990, that strange year when Radio Silence had failed to take America by storm and BG must have been waiting for the other shoe to drop at CBS. I say "appears" because—par for the course—the disc itself provides no details at all, and information about Akvarium's film work is surprisingly hard to come by. Compounding the difficulty is the fact that the Filmography box set (from which this album is drawn) is one of those occasional releases that seem to have taken place without Boris Borisovich's participation or approval (in the Official Discography it's classified among "Other People's Collections")[1]. We know for sure only that Home Under a Starry Sky was first released in 1991, which tells us that the music recorded "for" it is almost certainly from the same confused, transitional period that produced Archive, Book III.

OK, but what "is" it? Many things, Grasshopper. Let's start bass-ackwards and look first at the concluding 7:13 minute opus called, promisingly enough, "Requium." Put it on. Does it sound familiar? It should, since it's nothing more than a proto-but-extendo version of "Sirakh Malatoy Tan/Skir Lametan" from Bardo. Therefore, we can say unequivocally that true Bardo-laters need to have Mosfilm. Put on both versions on different stereos simultanously for a truly eye-popping quadraphonic experience!

Fans of the Anna Karenina Quartet, you odd ducks, will also be intrigued to learn that here is to be found a super-duper-duper-extended version of "Morning in the Pine Forest": nine and a half minutes that seems like, oh, twice that. Mere mortals will bleed at the ears and foam and the mouth, but you Anna Karenina fans will comprehend it as a discreet "фиг" to Vronsky and the rest of the lying, cheating, incoherent world. Two more similarly disturbing "Anna"-esque instrumental noisescapes—"City Bird" and "Halfway up Mt. Seriyapet"—will likewise rock your world...or call to mind an acute Russian wedding hangover. One longs to see Home Under a Starry Sky just to see if any of these tracks were actually included.

But—lest we get confused—Made for Mosfilm is not just about exquisite arias in imaginary languages and disturbing, disonant post-Eno sonic poems. The compiler of the "Akvarium All-Reggae" mix—you know who you are—won't want to miss little-heard rarity (and noted BorrowinG) "(It's the End of) The World as We Knew It." You can really smell the sensimilla on this one, but—hey!—the sentiment is actually spot on, as the CCCP happened to actually be imploding just about then. (On the other hand, R.E.M.'s similar take on the США was, and is, a bit before its time; "Exhuming McCarthy," however, seems more relevant than ever before). Sure it's dopey, but it's also good fun in much the same way that "Aristocrat" is, and this is the only non-bootleg version of it available.

Then there's a version—a longer, better version—of "St. Herman," the jolly toe-tapper we know from Cabinet of Curiosities, and the calypso stylings of "Don't Stand in the Way of Sublime Feelings," whose once-endearing silliness now (A.D. 2003) seems like a sinister harbinger of many nightmarish pseudo-Carribean excursions still-to-come. But the song is, so far as I can tell, identical to the version familiar from Archive, as is Library of Babylon's "Gay Janitor," an off-kilter Music Hall send-up almost as good as "Evgraf the Kid." Ergo, neither track can be really be chalked up as a reason to buy the album.

Indeed, if we're honest, is any of the forgoing—old, new, borrowed, blue—enough to actually recommend seeking out this album? The answer is "No"—even the most dedicated of Bodhisattvas is forced to concede. And if we threw in "America," a wistful piece of instrumental wonderment that combines (what is surely) the peerless accordion of Sergei Schurakov with mandolins and (what sounds like) a drum-machine? No, still clearly not enough.

But what might just tip those scales in favor of the album, if you're a certain kind of Bodhisattva, is "About the Disappearing Swan," one of the stranger Akvarium tracks I've ever heard…and that, my friend, is saying something. It starts off with a piccolo or tin whistle and a distant, martial drum beat for a full minute before an acoustic guitar and an accordion pick up the melody, something in a vaguely Celtic-folky style. Boris's vocals come in around the 3:00 minute mark and he starts telling us, yes, about a disappearing swan, which seems to be some kind of BIG SYMBOL of…oh, I dunno, the Ineffable Sublime. But where things really enter the realm of the excitingly bizarre is when Boris and some unidentifiable female begin chanting over and over (and over and over) "Hare Krishna, Hare Krishna, Krishna Krishna Hare, Hare Rama" (etc.) and basically keep it up for the next 6.5 minutes (!) as tin whistle, guitar and tambourine keep the time. It's both goof-alicious and lovely and calls to mind all those fine, dewy-eyed folks that kept some of the original Bodhisattvas well supplied with vegetarian samosas during their formative Vladivostok years. Pantheism served hot on a bun…yeah, baby!!

Therefore, should you be wandering the streets of Brighton Beach and see this album lurking intriguingly in the "cheap bin" of some Russian establishment (as happened to our own Elizaveta, the first to dig it up) you may just want to make your own offering to the gods and buy it. It's nobody's idea of essential, but it's more fun than certain (more recent, more labored) dispatches from the fish tank…

Endnote: [1] A supposition subsequently confirmed by BoB's own Mimoza: When I showed Сделано на Мосфильме to Boris, it was the first time he had seen it. Apparently the people at SoLyd Records, upon learning that Boris was moving his Rubekin-enhanced act to Real Records, responded by printing Aquarium's every frigging castoff and demo they could claim the rights to.