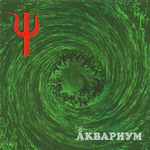 Ψ (indicated by a symbol)

This is the most mellow Akvarium album in years. A few bits 'o weirdness, groovily executed (especially the Bardo-esque "Svarog") but it's chock full of quiet acoustical stuffs...even a bit 'o a capella Borya. And the little touches—barely a horn here, barely an off-kilter, distorted guitar there—work wonderfully.

The ambient stuff seems to be mostly clicks & dings & drones & such by the everlovin', glorious Ded, plus the occasional unattributable buzz. The album echoes lots o' other Akvarium stuff but has its own sound (to overuse a word: "mellow").

The Name of my Blues Everything that sounded excessive in the Skorbets single comes off to good effect here—some genuine ambient buzzes & clicks & crunchy stuff over the big B.

Moon, Soothe Me Boris' post-lounge blues band sets the mood for an evening of sipping at the single malt and staring out the window. Is the scenery passing by or is the house moving? [Don't miss Dzhubchik's beautifully moonstruck meditation on this song, Solace in Simferopol-ed.]

Svarog Llar-a-hlar with changes & everything! Dig.

Bodyguard How many styles can you fit into one of-a-piece song? Flute and pulsing acousticalstuffs shift immediately to slide blues, which fades into and out of piano roll jazz.

While Carrying Saki Mal'chik Evgraf relaxes with the concept of saki; he's glad to be back at Paul McCartney's "Ye Olde Life Goes Onne Pubbe ande Pizza Shoppe" again... and we also toast his return.

Carpenter's Son Acousti-blues with snare drum and acousti-bass. Hey, what's that? Sure, invite in the horns for .25 seconds.

Masha and the Bears Sing and strum tink tink sing and strum. OK, boys, cue the bass, the way-background whacking drum things and the whangy string crunches. This is their first video offering from this album & it's a fine choice.

Flowers of Yoshivara Aaaahhh... the sigh at the end of the album. I like it. Lots. It doesn't kick your ass directly as some albums do, but it has that "of-a-piece" feeling that later Akvarium albums sometimes lack. And it's good. It's very good.

Other Bodhisattvas weigh in:

mimoza: ...still haven't made up my mind about the "ambient" production touches. Call them the millennial equivalent of Tchooo... Dzhub, incidentally, must hate this one: not one folk ballad. [Wrong. Dzhubchik's totally into it.]

Elizaveta, over there where it's always Sunday, rejoins: Of course, I'm reserving judgement until I've listened to it 5 million times—but so far it's a keeper.

Dzhon: I've decided Elizaveta's right: Psi is a keeper, but you do have to listen to it about 5 million times before it really begins to kick in. Strangely enough, the album it most closely resembles, despite all the ambient bells and whistles, is Ramses IV, which should tickle Dji somewhere below the belt. [Dzhon knows his Dji-ticklers...Dji replied with the review above.] Best tracks, IMHO, are "Masha," "Yoshivari's Flowers" and "The Name of My Blues," all which worked stunningly well when I heard them live on the tour that followed the album's release. Biggest downer—sorry, Dji—is the ultra-cheesy "Stop Machine," with its grating synthesized horns.

Notes: Dzhon enhanced his frighteningly formidible lingham by tracking down information on Svarog. Svarog is the "Slavic sun and fire god, originally the supreme god of the Slavic pantheon." See this compendium of Baltic and Slavic Gods

Technically, for this album Akvarium consists of Boris, Boris Rubekin and Ded—everyone else gets the indignity of being listed as an "additional musician."